Making The Decision: RAYCORE's SIP Panels Construction Is Just That - Stick Framing in a Panelized Form

The first big decision – SIP Panels or Stick Framing?  Why will I choose Structural Insulating Panels over the alternative?  Why not?  Which is the best framing choice for you?  Let's start with the basics. 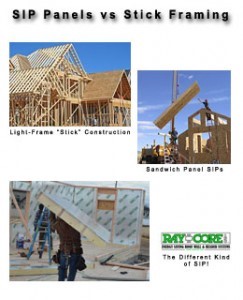 MAKING THE DECISION: Traditional stick framing as we know it has been around since the 1800’s. Also known as “light-frame construction”, this form of construction consists of vertical structural members called “studs” providing the framework of a building. Headers support the weight of the structure above wall penetrations, such as doors and windows. Rigid panels attached such as OSB or plywood and diagonal wood or metal bracing provide much of the strength to resist the forces of wind and seismic movement.  Wall sections usually include a bottom plate that is secured to the floor of the structure and two top plates that tie the walls together and carry the weight of the structure above.

SIP PANEL BASICS: Sandwich Panel structural insulated panels have been around since the 1950's. The most common structural insulated panel or SIP panel consists of a foam core insulation material, commonly polystyrene, sandwiched between two sheets of OSB and adhered with a glue. The strength of the SIPs come from the combination of these materials. These sandwich panels are joined one to another with a spline and attached at the floor with a dimensional lumber bottom plate and supported at the top with top plates as in conventional framing.

Watch for our next post where we will discuss the advantages and disadvantages associated with stick framing, SIP Panel construction and RAYCORE Structural Insulated Panels.