RAY-CORE SIPs ™ Made the Difference in Canada Passive House

SIPs Made the Difference. When Reiner Hoyer set out on his project to build one of the most energy efficient homes in Toronto, little did he know the challenges that he would face. Hours and hours of extensive research were required to find mostly new and innovative building practices and products that would provide the highest energy saving performance. This brought “new-to-him” products such as RAYCORE Structural Insulated Wall Panels otherwise known as SIPs.

Not A New Product - Producing SIPs Since 1987

Not a new product in the building market, as RAYCORE has been around since the mid 80’s, but definitely new to Hoyer, he was excited to find such an amazing product to frame and super-insulate his new Passive Home. RAYCORE Structural Insulated Panels have simply taken conventional framing practices, utilizing wooden studs and polyurethane foam insulation and wrapped them with a radiant vapor barrier in a modular 4 foot wide panel. Hoyer chose the 7-1/4” staggered stud insulated wall panel with 2x6 studs on 12” centers, offset to either side of the panel, providing a continuous insulation barrier that provides a thermal break, eliminating thermal briding. Many of the products Hoyer chose for his project were new technology, unfamiliar to local building officials and much of his time was spent educating. Familiarizing and providing information to these officials to obtain the necessary approvals. Hoyer found this a bigger challenge than actually building the house.

In a recent article posted by CanadianContractor.ca, it was stated that Passive House practices for many contractors is a new thing, requiring “unique and careful processes”. Reiner Hoyer stated that in his project, “I had to constantly coach every trade carefully at each step of the way.”

SIPs Performance - A Picture Is Worth A Thousand Words

Some people say that a picture is worth a thousand words. In Hoyer’s case, thermal imaging speaks volumes. On January 2nd, Hoyer stepped outside with a special camera that captures an image based on the temperature of the object in front of it.  This image shows the objects temperature, demonstrated in colors from deep blue to deep red with the blue colors showing the coolest surfaces and red the hottest. Variations from the spectrum  that include shades of greens, yellows and oranges reflect variations of temperature. Take a look at this picture taken that cold Toronto January night. 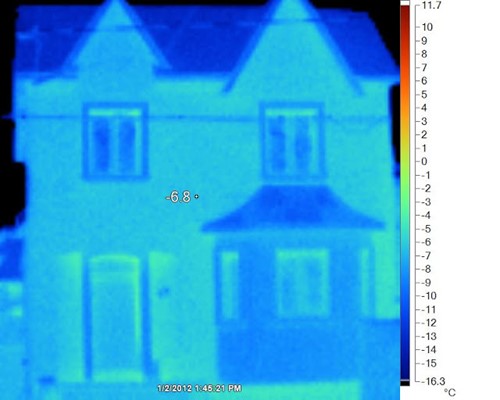 RAY-CORE SIPs ™ Home Demonstrates Through Thermal Imaging How the Highly Insulating Wall Panels Keep the Heat In and The Cold Out!

You will note that there is little variation in colors and virtually no heat escapes from the house through the SIPs panels.  Another thermal image from within the house shows the stability of temperatures found there as well.

It's All In The Numbers 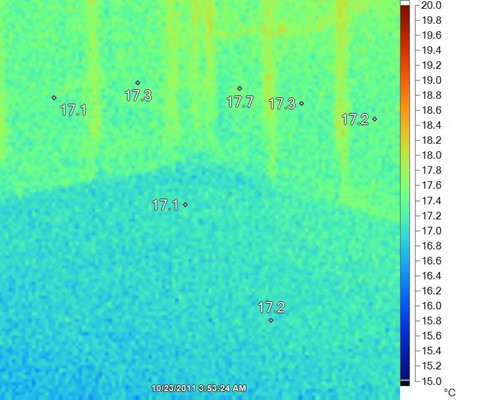 Super-insulating a house is of little value if there are voids that allow outside air to penetrate when the wind blows. Sealing the envelope and air tightness is a step that is just as important when building an energy efficient house. Homes, properly built with RAYCORE SIP Panels, provide that necessary tightness.

Sealing the RAY-CORE SIPs ™ with Foam, Caulk and Tape During Installation Ensures an Air-Tight Envelope

To ensure that the house was airtight and that nothing was missed, Reiner Hoyer performed a blower-door test to calculate the air leakage. To perform this test, all windows and doors are closed, the house is equipped with monitors and the final opening is sealed as shown below with a fan installed to depressurize the house. The result is a calculation of the number of air changes per hour (ACH) at a pressure of 50 pascals. In simpler terms, a value of air leakage is determined. The lower the number, the tighter the house. If the number is too high, the builder can seek out places where air might be getting in and seal them to make the house tighter. The blower-door test performed on Reiner Hoyer’s house, thanks to the endless steps taken to seal the house tight, passed with a .27 ACH @ 50. This is 50% better than the European Passive House standard. Hoyer gives the German made Passive House windows and doors a lot of credit, along with the RAYCORE Structural Insulated wall panels insulation and careful air sealing of all the joints. If you would like to know more about blower door tests, visit Martin Holladay’s explanation on GreenBuildingAdvisor’s website http://www.greenbuildingadvisor.com/blogs/dept/musings/blower-door-basics . 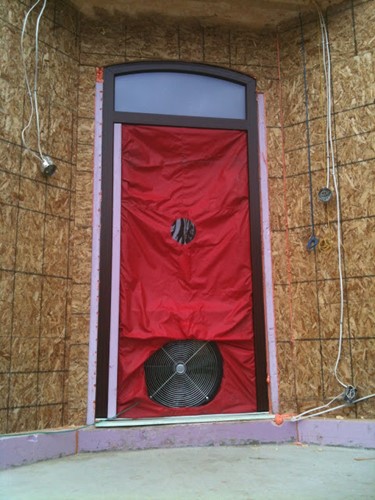 So Was It All Worth It?

When asked if Reiner Hoyer considered all the trouble worth it, he replied, “Absolutely.  Living in a house that cost me less than $20 a month to heat in the middle of the winter is a great thing.” Who would not agree? For more information about Reiner Hoyer’s project and his use of RAY-CORE SIPs, visit http://passivehouseto.blogspot.com/2011/08/second-floor-wall-are-being-craned-up.html or take a look at our previous posts about Reiner’s Toronto project.